We just got back from the cabin and I had so much fun!  When I realized where we were going, I was so excited I started crying and pacing, and we were still like 20 miles away!  When we finally got there I ran straight down the hill to the lake but it was frozen!  I didn’t care; I broke right through the ice and had so much fun playing in the water.  Then I was with Dad by the pier and I walked out on the ice until Mom said, “too far” so I came back but then I fell through the ice near the rocks but no one would help me up and they just started walking away so I scrambled right up on the rocks and Mom and Dad told me I was such a good smart boy.

The next day was even better because it snowed!  I raced right down the hill again into the lake.

I ran all around playing. 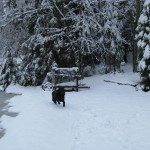 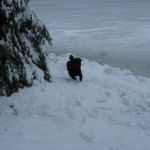 I found a great big stick. 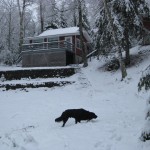 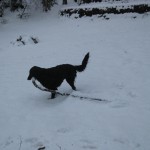 Then when I got tired, I just sat and looked at my lake. 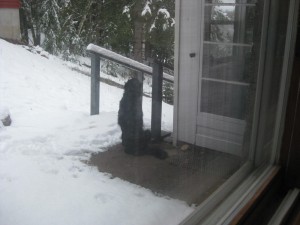 Later on we went for a walk to the cemetery and I got to run around some more. 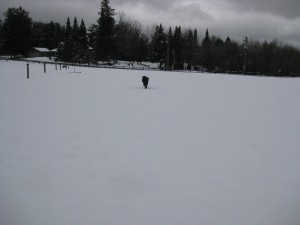 The next day was sunny and the snow started to melt.  Mom took me for a walk and we saw O’Leary and Alaska Mike and they said they couldn’t even tell..tell what, I don’t know but they both pet me.  Cody was barking on the porch so we left.  On the way home,  I was so hot in the sun, I was panting  and slowing down and Mom said she’d get me some water when we got back.  But I just ran down to the lake and drank all the water I wanted!  Silly Mom. 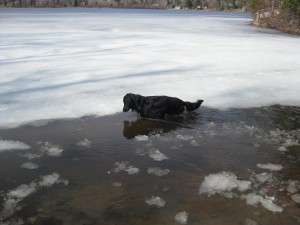 Because our little cove was frozen, Mom and Dad took me over to the boat landing and Dad said, “C’mon Tate, we want to see you swim.”  So I swam around a little bit but it was kind of boring, no sticks, no fish or anything.  So then we went back home.  They just wanted to see how I swim.  Duh!

I love our lake.  I wish we could live here all the time. 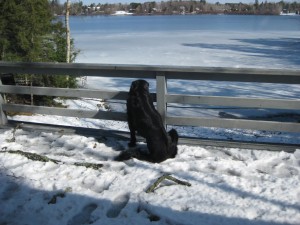 This was 6 weeks post-amp.  Up til this, he’d been “pretty good” but this was the first time he really was exuberant and running around.  I think he just needed a reason to get really excited about something.

Okay, strictly speaking not we’re not at one month until Friday.  But can’t wait any longer because we have reached the light at the end of the tunnel.

Tate has improved just about every single day the past week by leaps and bounds.   His appetite is more normal, he’s off the obsessive paw licking (although he still goes after the incision), and he’s stopped giving me those spooky stares.

The only really kinda “off” day was two days after chemo, he slept more than usual.  In his bed, in the bedroom, away from everyone which he never does.  But no other side effects.  (yaaayyy)

Here’s a partial list of his astonishing accomplishments (if you can indulge me for just one minute):

Day 21 – He scratches the door to be let back in!  Balancing on two legs!

Day 22 – Balances on his butt to scratch behind his ear with his remaining hind leg!

Also on Day 22 – Play bow with Loretta (but wisely decides this is not a good idea yet…smarty-pants.)

Day 23 – Tries to scratch behind the other ear but there’s no leg there to scratch with!  Figures out a new way to scratch that itch!  (Although he prefers Dad’s roughhousing scratches, so sometime he wiggles his semi-stump just to get Dad to scratch him…smarty-pants-plus.)

Day 25 – Walked all the way around the big block!

Okay, I could go on but you get the picture.  Not to say he’s 100% but he’s himself again.  For a few weeks there, he was miserable because he felt crummy, wanted to play but couldn’t muster any energy and on top of that, he couldn’t figure out why he was always in trouble (so much of his treatment felt like punishment).  At least that’s Dad’s view of things and I think he’s right.

So when I look back, 2 months ago, we got the cancer speech, ending with “Oh, and if you don’t do anything, you will decide to euthanize him in a matter of weeks because we won’t be able to manage his pain.”  And I’m looking at my bouncy, waggy, shiny 4 year old dog, going “Wha-a-a-a?”

Frankly, I think that would be a shock to just about anyone.

But we have come out on the other side, not making too many missteps, not too many things we would have done differently.  I was reminded again that “This too shall pass” applies to the good seasons in life just like the bad.  Tate was always a refuge for us, a carefree respite from all the bad stuff life throws at you.  Hugs and pets throughout the financial distress, the fractured relationships, the grave diagnoses, the loss.  But then Tate had the grave diagnosis, so now the season is a little less carefree.  But we’re here, older and wiser.  Enjoying sweet hugs and pets all the more.

I can’t say where we would be without Tripawds.  Thanks for listening, and for sharing, and for letting me vent here so my two boys (husband + dog) wouldn’t have to bear the brunt.  : )

P.S.  Blood work is in, but I don’t know what it all means…doesn’t matter, it is what it is.  I’m just so happy that Tate’s happy.

Tate has had some really good, “new normal” days in the past week, and some days of long naps.  His paw licking is rising to new heights!  His appetite is ravenous.  And everyone once in awhile, he will just sit bolt upright and stare at me.  For a long time.  What’s up with that?

We met with the oncologist today, and he is sticking with his 1-year prognosis.

So we are without that bit of information.  Doesn’t matter, our Tate is in the hands of a Power higher than either the pathologist or the oncologist (which is not to say he’ll live a normal life span because, after all, God is not Santa Claus…just my own personal theological hot button.)

We are proceeding with chemo, CCNU, the same drug almost everyone else with histiocytic sarcoma gets.  Luckily for us, it is pill form (much cheaper than the IV form).  Blood work in one week to watch especially his white blood cell count and platelets, then again on the day of his next dose in three weeks.  One risk of CCNU is it damages the bone marrow and this would affect platelet production.  With insufficient platelets, his blood will have trouble clotting.  This damage is permanent.  Of course, there are other potential risks but this one sounded the most troublesome to me.

Interestingly, he put Tate back on Rimadyl because it has cancer-fighting properties.  I asked about the risk of liver damage with Rimadyl and he basically said I spend too much time on the internet.  Needless to say, he was not big on any supplements, either.

I’d like to consult a holistic vet but the $170 consultation fee put me off a bit, still reeling from the $400 for a second opinion (they said it might be blasto…in January?)  I’m on the nutrition/diet research trip and boy, there’s a lot of information out there.  Thanks to everyone that posted their pup’s regimen, very helpful.

So for now, until I unravel this, we’re sticking with Taste of the Wild adding a bit of olive oil and chopped-up green veggies, adding sardines to his list of snacks or mix-ins.  Cutting out the canned pumpkin and all the fruit.  Tate loves fruit, bananas, pears, watermelon especially but we don’t want to be feeding any cells that we should be starving.  On the other hand, this feels a little bit like using a pea-shooter against, I dunno…maybe King Kong.

On Day 16, I would say Tate was at about 40%.  On Day 17, I’d say 85%.  He popped up with the alarm, tail wagging, and resumed a lot of his routine behaviors.  Plunked himself outside the bathroom door while I brushed my teeth, went completely around the block with no rests (okay, it’s a short block but still a milestone), wanted to play with his ball, pushed open the door to the garage to run out when he heard my car coming home.  All while wagging his tail.  A blue-ribbon day.  A big change just that fast.

He tried walking over to Grandma’s but I made him come home, too far (0.6 mi).  But we drove over and they were so happy to see each other!  And Grandma did really, really good at holding back her tears.  She may not have much memory left but she still has her great big heart.  She knew better than to cry in front of Tate!  I was so proud of her.

Now that we are past the amp, I’m back to researching histiocytic sarcoma.  Now I know the stories of Harley, Barney in Texas, Ruthie, Tehya, Marley and Barney the collie.  Thank you so much for sharing!

Another Tripawd blog (Toby) led me to Peter Moore at UC-Davis.  It’s the best summary I could find, at:  http://www.histiocytosis.ucdavis.edu/  (I think this jump is in the Resources but it would not link for me.)  (BTW, it seems blogs show up in Google searches but not the forum?)

So the pathologist mentioned “curative” in reference to the amp, the surgeon said “Tate might enjoy a normal lifespan”, and the vet said “We may well have saved Tate’s life.”  All very promising, as it appears he has “localized histiocytic sarcoma” and not “disseminated histiocytic sarcoma.”  I am trying not to get my hopes up until we speak with the oncologist on Tuesday because I know how insidious those evil cancer cells can be.  But I’ve realized, I’m kind of counting on this.

Just a couple other oddball observations.  Tate’s started licking his bed or the carpet next to his paws.  I guess they do this.  The other thing is that Tate used to sneeze a lot when he got up in the morning, and he used to have a discharge from the corner of his eye a lot (eye boogers, to be descriptive about it.)  Neither of these things is happening anymore.  Very odd (to me).  Not that I miss them.