For my summer vacation, we went to our cabin up in northern Wisconsin.  It’s a long drive and I was stuck in the back with Sam almost the whole entire time, except when she scrambled up in the front seat to bother my mom.
I knew where we were going when we were 50 miles away!  I could just smell the pine trees and lakes and I knew.  So I started crying because I was so excited!  But then we finally got there.  I jumped out of the truck and when Mom said, “Clear!” I ran down the hill straight into the lake. 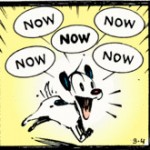 But in the meantime, it’s all about NOW!*

*Courtesy of Admin, from “Stop and Smell the Roses – A Mutts Treasury”  : )

First I should explain that I’ve decided to ignore Tate’s ampuversaries.  It just doesn’t work for me, too much like a clock ticking, or maybe a time bomb.  Makes it a little too hard for me to stay “in the moment” when I’m counting time.  But we will continue to celebrate everyone’s ampuversaries, any excuse for special treats!

So, on to the important stuff.  We’re just back from a week at the cabin and I haven’t seen Tate this relaxed and happy in a long time.  He’ll post his own update : ), but he basically spent the whole week in the lake and luckily, Little Sister Sam is turning out to not be the water dog Tate is so he had plenty of uninterrupted swimming and fishing.

He swims beautifully, as far and as long as ever.  He likes to stand in the water and watch for fish, and I noticed his back leg would kind of give out every once in awhile but he’s just adjust his position and resume watch.  He also comes in off the water a little earlier, rests  little more.  Who knows?  Maybe it’s his age.  He doesn’t have that puppy exuberance that he did even last summer when he was 3.

His last chemo was over a month ago and no more poop/barf problems and he’s guzzling water again like Evelyn guzzles whiskey.  He’ll start metronomics this week, cytoxan + Rimadyl.

We must be spoiling him a little too much, for the first time since I don’t even know when, he would not “Come” on command.  We had a little chat about it later (“I was calling you”) and it hasn’t happened again since.  I thought the correction may have come too late – I didn’t want to go in the water after him so I let it go – but he’s such a good smart boy, he knew he’d been wrong and wanted to make up!

An update on Sam for the Tripawds Puppy Advisory Board:  she’s doing wonderfully, many new experiences in the last month when we weren’t sure how she’d do but she did fine.  Learned her boundaries at the beach and at the cabin, learned how to behave on the boat, learned to stop rolling on dead fish else she’d get a bath, learned not to swim out too far.  Learned that when Tate goes under Dad’s desk, he’s done playing.  She definitely has a more outgoing and adventurous personality than Tate but she’s coming along so now Tate is more inclined to initiate play with her.  So overall, we’re very, very happy with her!  We’re so grateful your wisdom got us over the rough patch!