“The Tate Years” drew to a peaceful conclusion today.  After Friday’s Celebration, he declined quickly.  The diuretics were no longer working.  This morning he made it clear he was ready and refused any more meds.

Tate was truly a blessing in our lives.  If I could think of one negative thing about him, one shred, I would latch onto it and say, “Well, at least I don’t have to put up with that anymore!”  But I can’t, he was perfect.  He was always obedient, whether he wanted to obey or not.  He was always happy, his tail always wagging.   He made everything better.  He made all our cabin trips more fun.   He brought so much joy to my mom when she was too incapacitated to enjoy much.  He taught us the importance of “Now” and so much more.  He was always, always there for us.

God’s gentle plan is evident all over Tate’s passing, starting with a sunny 57o on Friday for Tate’s Farewell Celebration, which was followed by a drizzly weekend in the 30’s.  He played a little with Sam on Saturday.  He slept most of Sunday.  Very early this morning, he cried for the first time.  He would take 2 Tram but no more.  He was able to make it outside and then hid under the low boughs of the spruce tree.  He refused to eat.  Rick was able to coax him inside, and we just spent time with him until the vet’s office opened.  We knew the clock was ticking, but we were able to get him in to the vet before the pain meds wore off and everything went okay.  So he went quickly and did not suffer.

Thanks to all of you for being with us on this journey.  Please don’t be sad, be happy that Tate came into our lives and changed us for the better.  He was our irreplaceable, good, smart boy.

“In order to really enjoy a dog, one doesn’t merely try to train him to be semi-human. The point of it is to open oneself to the possibility of becoming partly a dog.”- Edward Hoagland

Well, when the local Tripawds community heard the latest on Tate’s diagnosis, they said, “Hey!  The weather is going to be nice this Friday so let’s all go to the beach so we can play with Tate!  Let’s celebrate and be happy we got to be friends with Tate!”  So here’s Tate’s story about his Most Excellent Farewell Celebration of Life! 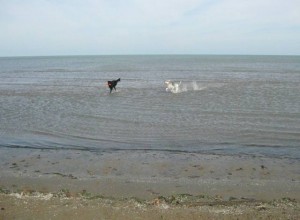 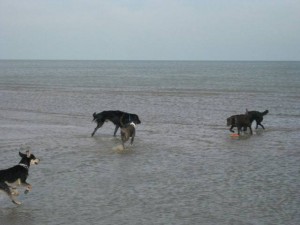 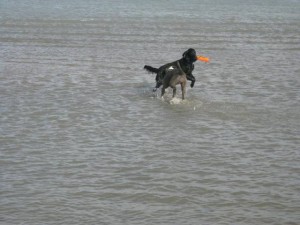 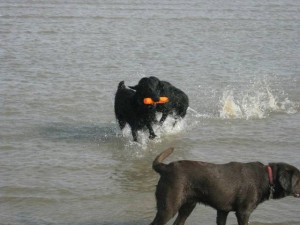 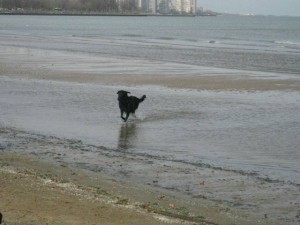 I felt so good and happy when our visit was over, and I got lots of special treats and toys.  Sammy and I ate Pup Corn on the way home (from Aunt Annie and Uncle Brian!), and then I had a good long nap.  Then I got up and had special lamb topping on my kibble (from Aunt Cynthia!) and more turkey.  Then I had another nap and Mom said my paws were running while I was sleeping.

Today just proves that Tripawds people really ARE the best!

Special thanks for Cynthia for arranging, to Brian for driving so far to bring Ginger (we missed you Annie!) and to Heather for bringing her camera (we’re looking foward to seeing your pictures!) and to everyone for showing up on short notice to make this part of the journey a lot more bearable.

Wow, things went south quickly.  I’m not going to speculate about how we got here, too much potential for “If only…”or “Why didn’t we…” and I just will not go there.  This is all going according to God’s plan, whether I like it or not (and I don’t.  And He knows it.)

So we learned a couple days ago that Tate’s cancer has spread all throughout his abdomen and it is so extensive there is nothing that can be done.   (Although we had decided ahead of time that we weren’t going to do anything, we decided Tate’s had enough.  It really bothered me that he went through x-rays and ultrasound to diagnose this but he’s done with all that now.)  We had no indication anything was seriously wrong; we just noticed he was drinking a lot and then he woke me up a couple times during the night to go out.  Really, I thought it was a side effect of the metronomics, they’d adjust and we’d move on.  His appetite and energy have been fine, everything has been so normally normal you couldn’t get any more normal.   Well, I did notice then that his remaining rear leg was swollen, I probed all around it and he didn’t flinch but I just thought “That’s odd”.  Of course, when the vet examined him, red flags went up everywhere and off Tate went for tests and more tests.  The swelling is edema, the vet explained the mechanism but I don’t remember it.  But the point was, there was nothing in any of Tate’s blood work to indicate a cause and so it must be…a malignancy.  Which ultrasound confirmed.

We found all this out one day before we were leaving for TN and KY.  Yep, we were going to visit ET Gayle.  Rent a cabin on a lake, explore a new part of the country and visit some friends in KY on the way back.  At first, we thought we’d shift gears and go to our own cabin instead but decided the drive might be too much for Tate.  If we could be magically transported there, well, then.  That would be another story.

We also decided on a home euthanasia.  That’s because we really do want to keep Tate out of the vet’s office.

So here we are.  Tate is doing well.  He likes being spoiled, last night he looked at me over his shoulder:  “Time for my belly rub, Mom.”  Today, he turned his nose up at kibble, “You don’t really expect me to eat this, do you?”  : )    He ran a bit with Sam this morning – she wants to play with him so bad but is cutting a wide path around him (thankfully).  He tires easily but we’ve figured out the pain meds and no adverse side effects.  The edema is worrisome but the vet tech assured us that as uncomfortable as it looks, the pain meds are taking care of that.

I can’t tell you how much all your responses to my forum question have helped.  This is such a crummy path to travel but I feel like I have you all holding me up, literally holding me up under the arms like you do with a little kid learning to walk.  This is not a walk I want to learn.  Can’t we just go to the Grand Canyon instead?